We have been very busy around our house.  Jacob has been potty training and moved into underwear today.  He only had one accident at school.  YIPEEE!  Hopefully he doesn't have any accidents on our couch or carpet :).   We went shopping for undies last week and he happily picked out underwear with pirates, trucks, footballs, and fire trucks on them.  He is so proud to wear them.  When you tell him that he has to tell you when he needs to pee he rolls his eyes at you.  You can tell he has probably been told a million times and is so tired of hearing it.  I love how cute he is when he pees in the potty and you tell him how proud you are of him.  His face lights up and he jumps up and down.

Jacob has also been very busy with his swim lesson at Michael Phelps Swim School.  We have gone the past two Saturday mornings and he loves it.  This past Saturday he kept telling me he could swim by himself and to let him go.  I'm so glad he loves the water.  I think we may need to sign him up for private swim lessons with his teacher Mr. Joe.

Lastly, Jacob started Soccer Shots on Wednesdays at school.  He is learning how to play soccer and I think he is having a good time.  They teach them how to dribble, kick, and shoot goals.  Last week he came home saying he kicked the ball in the net and was very proud of himself.

I thought I would post this video below.  My mom taught Jacob the song "Down By the Station" but he can never remember all the words.  He just made up all the words at the end of the song.  I love this video.  Our little music man may be taking piano and voice lessons in the near future :).

Has it been 3 months?

Yes, I know I haven't posted for almost 4 months now.  To be honest, blogging is not really my thing.  I am not one of those people that can work all day long in front of a computer and then go home and spend a few hours on the computer in the evening.  When I get home all I want to do is eat a nice dinner with my family, give Jacob his bath, and snuggle with him at bed time.  Once I put Jacob to bed I like to just chill out with Andrew on the couch.  I don't want to think about a blog post.

I know my fmaily likes to see pictures of Jacob and know what he is up to so I will continue to do some posts for you.

- We went to OBX with the Birmingham clan.  Jacob loved the beach, pool, playing with his cousins, and the Duck Parade with Duck Donuts.  Now he likes us to draw pictures of him in a parade with Grandma and Grandpa.  He is always playing the drums in the parade pictures.  I think he may take after his father and play the drums in marching band one day.

- Watching our bubba grow and learn.  Last night I came home late and he was sitting on the couch with Andrew, watching "his shows" and eating popcorn.  When I sat down and looked at him I couldn't believe how much he has changed and grown.  He really is turning into a little boy.

- Watching the Olympics.  Jacob really enjoyed the Olympics this summer.   He is obsessed with Michael Phelps.  He had Olympic week at school and he could name all the events and athletes.  The teachers were so impressed with his knowledge that they made a special Olympic book just for him.  Michael Phelps (one of the male teachers at the school) even called Jacob on the classroom phone and told him to remember his manners, to listen, and follow directions.  The teachers said he was so excited that Michael Phelps called him.

- Jacob is also really working on his hand eye coordination by practicing hitting the baseball.  Last week he hit the ball three times when I threw it to him.  Granted, I threw about 30 pitches but I was impressed that he stuck with it and kept trying.  I was very proud of him.

Soooo we have been very busy around our house. 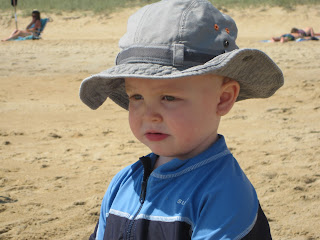 Well, if I didn't feel old when I turned 30 I feel old now that my little baby is 2. Last Saturday we celebrated his 2nd birthday with a Mickey Mouse party. I thought he would like the theme since it wasn't too long ago that we got back from seeing Mickey in Florida. I decided to go all out for this one making Mickey Mouse treat bags with Oreo cookies, cutting the cheese with Mickey Mouse cookies cutters, and cutting up the peanut butter and jelly sandwiches in the shape of Mickey. It was pretty fun preparing for the party and getting into the theme. I feel like there are only so many years that you get to throw theme parties for your kids. I think he had a fabulous birthday. What was his favorite part of the day...... the cupcake, balloons, playing basketball with his cousin Garrett and Uncle Jason, and his Playmobil trash truck. It was a wonderful day filled with love and wonderful friends and family.

Jacob had his two year appointment this morning. He weighs in at 38 lbs and is 3 feet tall. He is in the 99% for weight and 89% for height. I think we are slowing down a little on his height which his daddy isn't thrilled about. (He wanted a 6 ft 5 in. left handed pitcher :) )  All in all the appointment was great and I think Jacob is right on target with what a 2 year old should be doing.

At 2 Jacob can do so many things but here are just a few:

I am looking forward to watching our little man grow this next year and seeing all he can accomplish. We are so blessed to have such a wonderful and special little guy.
Posted by Sally at 8:28 AM No comments:

Yesterday we headed to Hersheypark with my mom and dad and Andrew's sister, brother-in-law and their two children. Jacob was a little shy at first and spent about an hour taking everything. Eventually, his cousin Garrett got him on a ride and then Jacob was ready to ride for the rest of the day. I think his favorite ride was a toss up between the ladybug ride and bumble bee. He loved how fast the ladybug went but loved that he could press the button on the bumble bee and it would make a buzzing sound. I think at one point Garrett told Jacob to stop pressing the button on the bumble bee because it was getting annoying :). We had wonderful weather, wonderful company, and a wonderful day at Hersheypark. What a great way to end Jacob being 1. On Saturday he will be 2. I can't believe my little baby is turning into such a little man. 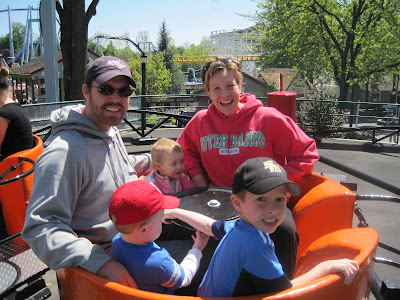 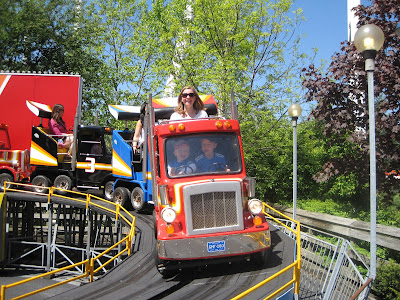 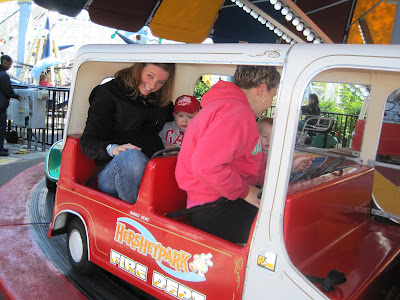 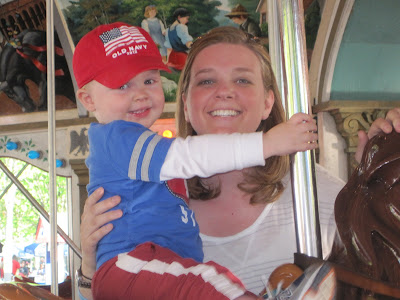 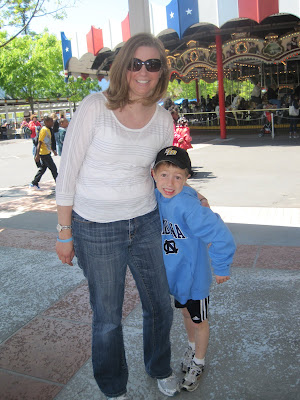 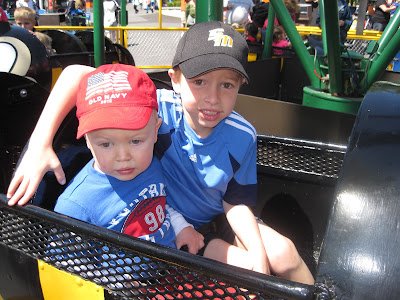 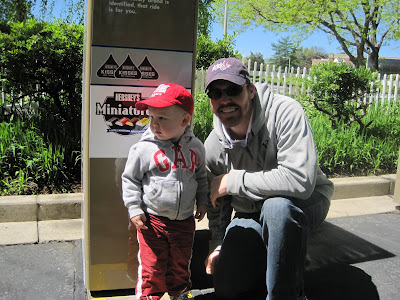 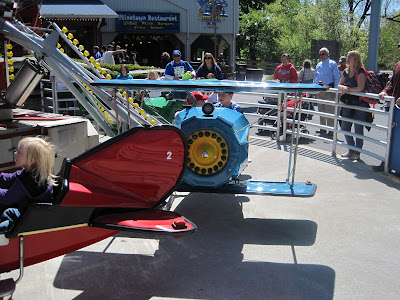 For the last few weeks Jacob has been saying "yougits." I could not figure out what in the world he wanted or what he was saying. I would ask him to point and he would just laugh. I would say, "yogurt?" and again he would just smile and laugh. FINALLY, this weekend I figured it out! It is MUSIC! I don't know how he gets yougits out of music but at least neither one of us is frustrated by not understanding. He can say the M sound so I don't know why he says yougits but it is cute.

Jacob is really starting to put words together and form sentences. He will ask me "What is that?" when he hears a noise. He will ask for a snack and then say "Daddy have one too." He will tell you what he wants to wear to school (his fire truck shirt) or bed (fire truck pants). He will even pick out the books he wants to read and tell you the titles.

One day Jacob came home and started saying banana instead of nana and it was so funny how he pronounced it we just had to get it on video.......


Another word I want to get is glove. Jacob says glub. It is really cute.
Posted by Sally at 4:40 PM 1 comment:

We noticed our little man is a little sensitive to light. If we leave the light to bright at night when we put him to bed he will cover his eyes with a blanket to get to sleep or tell you "light off." Sometimes in the morning we will find him with a blanket over his eyes to block out the morning sun or squinting like a mole saying "too bright." I guess pretty soon he will have to get an eye mask like his mommy.

Sally
I am a working mom who is trying to balance time between my husband and son while moving my career foward. I enjoy working most days but I am sad when I miss out on special moments in my son's life. This blog is designed to keep my out of state family updated on life here in Baltimore.